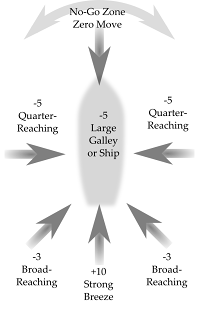 As previously promised, here's a rough draft of a diagram illustrating the effects of wind direction, speed, and ship size on ships. For galleys, halve the wind-speed bonus and double the wind direction penalties.

Over to the side of the diagram in any final text I would produce, there would be notes that ships in a gale can only travel in the direction of the storm at Move 3, movement upstream in a river is halved, and a ship cannot sail when becalmed.

Edit: Damn, I forgot to look at it up close. I thought it was off-center, but figured I was imagining it...

Edit 2: Looks like I also left off beating, which should be opposing broad-reaching. It's a -10 Move instead of -5, and galleys aren't able to do it: they have to switch to oars to make headway.