Next up on our look at modifying random dungeon generators to make them more non-linear, I wanted to look at a different approach to rolling for a corridor's destination. SubMethod I relies on room numbers as references pointing to physical locations. This works great if you want to use room numbers as your way of keying rooms, but not so great if you prefer letters or multicharacter labels. It doesn't allow for nested structure labeling (room 1 as a main room and 1A/1B as subrooms.) And it doesn't work well at all if you want to use numbers for any point of interest, like a trapped intersection, not just literal rooms. 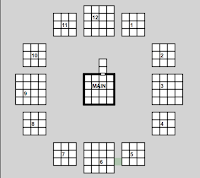 The solution is to use some kind of relative numbering system, something better than "roll dice and add a modifier to get the actual room number". One answer is to number the relative positions around the current room, for example using 12-hour clock positions, with 12 o'clock as the area due north of the current room, 3 o'clock as due east, 6 o'clock as due south, and 9 o'clock as due west, so that you can roll a d12 to select the room that is in that relative position as the destination of a corridor. In the illustration to the left, the main room in the center has a door in the north wall. We would roll a d12 for the destination of that door; a result of 12 would mean that the corridor heads straight north to Room 12, while a 7 would mean that the corridor turns west for about 40 feet, then south until it connects with Room 7.

(Incidentally, I've been using Alex Schroeder's Gridmapper for these quick demonstration pics. I only recently found out about it, but I've been out of the loop for a while, so probably everyone already knows about it. I work on the pic in another tab as I'm writing the blogpost, then use a Chrome extension called Nimbus Screenshot to quickly save the pic and insert it into my post.)

An alternative that might be easier for some people would be to mentally overlay a tic-tac-toe board over the map of the area immediately around the starting room, with the center square as the current room, and number the other squares clockwise from 1 to 8, starting at the top. Use a d8 with this method to indicate the destination square.

In either case, the corridor heads towards the indicated destination. If the area hasn't been mapped yet, you can roll to see what is in the area using a d10:


You can change the target number of 6 to a different number to shift the proportion of corridors to rooms, or use the junction table on the pre-loaded non-linear dungeon post instead.

If there is a room or corridor already in that location, the new corridor connects with it. (Notice that we don't need to connect with a room, or even with a keyed location...)  Alternatively, for corridors, use the d10 table for crossing pre-existing corridors from the SubMethod I post, which will add a chance for sublevels above or below the main level.