World-Building and Player Handouts, Part I: Cosmic and Continental

It seems like ages ago when I wrote about limiting info in handouts so that players – including yourself – don’t have to do tons of homework to play in the world. A couple people asked for a walk-through for the “factoid” approach I suggested, which means in general only describing each thing with about three short sentences and only filling in the details on the immediate locale. I’m going to break up the example over a series of posts.

Cosmic Scale Factoids
The first three bold italic factoids would be in the player handout as something players would need to know to understand the campaign. The other three factoids are mostly for the GM, although players could learn these things in various ways. Long-time readers of my blog will have seen previous posts on all these factoids. Factoid #5 about the absence of planes is covered in the Infernal Neighbors posts and PDF, for example, and Factoid #6 is Clerics Without Spells.

Normally, factoids at this level would begin with the name of the starting continent, but because of the first factoid above, among other things, “continents” aren’t even necessarily common knowledge.
Again, only the first two factoids would be included in a player handout, perhaps with a crude map like the one below. 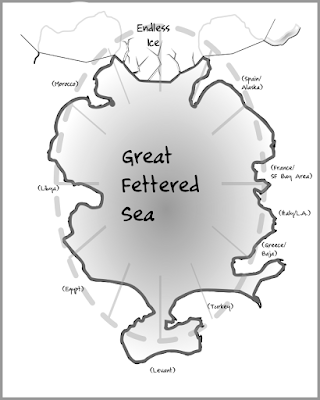 The third factoid merely means that, if a player asks a question about distant lands I haven’t mapped yet, I use medieval versions of existing reference points. You can see on the map that I have an elongated “clock” superimposed on the crude suggested coastline, and there are different coastal regions labeled based on what country they would be if this really were the Mediterranean rotated 90 degrees. Spain is roughly 2 o’clock, France at 3 o’clock, Italy at 3:30, and Greece at 4 o’clock.

But also, I match up the east coast of the sea with the west coast of North America, so each coastal region is a pseudo-medieval cross between a Mediterranean country and a modern day Pacific Coast urban area. France, in this case, is also the San Francisco Bay area, the dominant city being Sofaria. The starting locale in my campaign is upriver from the pseudo-French kingdoms, in Port Skar, which is on the edge of where things begin to get weird.

History and culture factoids will be covered in the second post of the series.

Labels: 9and30, cosmology, dnd, sandbox
Email ThisBlogThis!Share to TwitterShare to FacebookShare to Pinterest