I've long wanted a way to describe distances on dungeon maps that is not tied to a standard measurement system.

This may sound crazy, but think about it: the overwhelming majority of dungeon modules use feet as a standard measurement, because D&D was made in the US and the US uses the Imperial or Customary system of measurement. You can't just switch to the metric system, because:


But on the other hand, the system we use makes no sense to those who aren't used to it. It's not relatable to their experience.

One solution is to use yards and meters interchangeably. You wouldn't want to do that in the real world, of course, but for a game, they are close enough that it's perfectly fine for people to pick the most comfortable and just use that.

That works for heights, but not so well for either long distances (travel) or short distances (dungeon maps.) For the former, I've already switched to giving distances in leagues, which are not exact, but translate into one hour of travel, so it's relatable. For the latter, though, typical dungeon maps use 10-foot squares (or 5-foot squares, for new school people.) That doesn't translate well into either yards or meters. 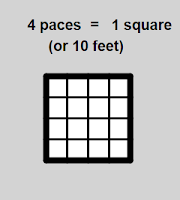 What I'm thinking of doing is using paces as my unit of dungeon distance. Like leagues, paces are not exact, but are based on human scale measurements: the length of one step. The "standard" pace is 2.5 feet, which makes the traditional old school dungeon square 4 paces.

It makes sense, because anyone doing mapping in a dark dungeon is going to be pacing out the distances, anyways, rather than using rulers or surveying equipment.

Labels: general
Email ThisBlogThis!Share to TwitterShare to FacebookShare to Pinterest