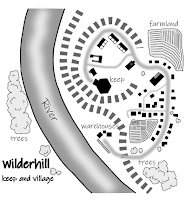 I'm an hour or two late with this week's Map Monday because I was trying something new. I've been thinking about trifold pamphlet dungeons, or more accurately, about what else could be done with that format. And since the tower pamphlets I've been uploading frequently refer to unnamed nearby settlements, it occurred to me: what if the GM doesn't have a nearby settlement, either? A pamphlet village or town would fit the bill nicely.

So today's map is Wilderhill Keep and Environs, an "instant village". Details are kept to a minimum, nowhere near as complicated as city supplements like Carse. It uses the impromptu village and town rules I've been developing, but with just the parts you need to improvise this one specific village. There's both a player map and a GM map. Print out just the player side of the pamphlet so they can have a map to make notes on, and print out the two-sided version for yourself. Local craftspeople are unnamed and their craft or trade left undefined, so each GM's version of Wilderhill will be a little bit different.

There's a list of local conflicts, secrets and events to give you some ideas to work with for in-town encounters and adventures. Just who is the traveler in red, anyways? What's going on?