Everyone wants to simplify the way saving throws work, but the approaches I’ve seen all leave something to be desired. The single target number save system is just too simplistic, when it’s not the original system in disguise. The Fortitude/Reflex/Will system adds saving throws where I don’t want them, and I vehemently object to Will as a category. 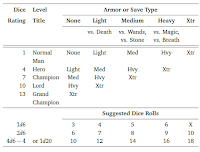 It merges the saving throw table with the attack table by equating saving throw categories to types of armor. It assumes the following for normal humans:
Character classes would get bonuses for some categories: Wands and Dragon Breath for Fighters, Magic and Death for Clerics, Stone and Magic for Magic-Users. Thieves could get a bonus to Wands and Death.

Since this is a dice-neutral table, the exact bonus depends on what dice you are rolling for attacks and saves. A +1 or +2 would do in most cases. The M-U save vs. Magic bonus should be Level/4 (round up) if you want it to be closer to the original probabilities. Or, as an alternative, you can use the advantage system on one or both of a class’s favored saves, rolling twice and taking the best, which will give a much greater benefit than a simple +2.

Labels: class, clone, dnd, save
Email ThisBlogThis!Share to TwitterShare to FacebookShare to Pinterest