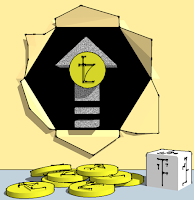 Here’s another Liber Zero reference sheet in pamphlet format: the Character Advancement GM Reference Sheet. This contains the full version of the XP modifier table and an XP/Hit Dice progression table. It also has guidelines for awarding experience points, optional XP awards for GMs that want to try something other than “kill monsters and take their stuff”, rules for going past Level 11, starting at a higher level, or switching classes, and general advice for the GM about handling experience. That doesn’t mean players can’t look at the pamphlet. though. In fact, the information is arranged so that the most relevant information for players is the first information you see when you open the pamphlet.

The XP modifier table is for my version of bonuses for high primary abilities. What I did, as you may recall, was “zero it out” and precalculate XP for a unit of treasure to eliminate subtraction and percentages to simplify the process. It’s all addition and multiplication. The version in the character card pamphlet was a “basic” version, which assumes all classes advance at the same rate. This expanded table uses a trick to boost the XP bonus for classes that advance faster:
The pamphlets for each class will have custom tables that eliminate the need for Step 2.

The original game, of course, has a unique progression table for each class. Some people dump this approach and make all classes progress at the same rate, but this alters the balance between the classes. Boosting the XP bonus for individual classes is sort of an in-between approach: I can use one progression table, but fighters will progress faster than magic-users, and clerics will progress faster than fighters. It duplicates the effects of the original game without copying the mechanics.