I've talked about random map tricks before, but I'm not sure if I've done anything restricted to d6 rolls, kept as simple as possible (no dice map/drop dice techniques, easily memorizable so that you don't need to consult a table...)

You've already seen one such trick in the Generic Tower and Dungeon Expander semi-random dungeons. In a long corridor like the one in the pic, roll 3d6 for each side of the corridor and keep only one die out of every set of doubles or triples. The remaining dice, in order, are what's behind the door, using a simple d6 "table" expressed as a map. (I've modified the room order for this example by making a result of 5 = the Tunnel and result 6 = the Staircase.) Optionally, at the end of the corridor, roll 2d6 and use one die result if you roll doubles, otherwise leave it as a dead end. 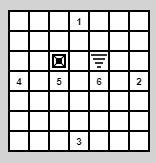 The next trick would be to apply this to room exits as well. Roll 4d6 for a room, only keeping one die from each set of doubles, triples, or quads. Results 1 through 4 are doors in each of the four walls. Result 5 is a ladder in the middle of the room (I used a trap symbol, because I couldn't find a better option in Gridmapper.) Result 6 is a staircase. Roll another d6: on 5+, the ladder or stairs go up, otherwise they go down. 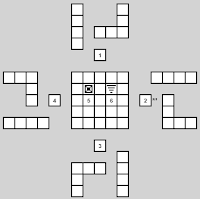 But these two tricks work best when used on a "seed map" of tunnels, using Trick 1 in each section of tunnel, followed by Trick 2 to find the second exit in any room discovered. So Trick 3 is to roll 2d6 multiple times to find the direction of several tunnel segments. The first die indicates the tunnel starts at the map edge indicated or in the center of the map. The second die indicates where the tunnel heads. Results 1 through 4 are one of the compass directions. Results 5 and 6 are the center of the map, again indicating a ladder or staircase. The tunnel segments are all a standard length, say 240 paces (60 feet,) after which it may extend as indicated in Trick 1. Don't discard doubles for this roll: instead, doubles indicate a U-turn for results 1 through 4, or a landing stage between two ladders or staircases. (This is what the short "L" segments represent on the map.)

How many tunnel segments you need to create a seed map is mostly a matter of taste, but I'd say three would be a decent start.