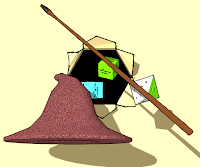 It’s Liber Zero reference sheet time again! Finally, I finished the pamphlet for the Magic Class. In other words, magic-users. The hold-up, really, was that any pamphlet meant to help beginning players create a magic-using character would necessarily have to include a short list of beginning spells, but I haven’t necessarily settled on how I want spells to work. I haven’t done much for the LZ build-a-spell system.

As it turned out, there was no room for even one-line spell descriptions, so I just needed a small table of spell names. The one included are tentative and might change. The basic naming schema is that Verb+Noun names tend to be reserved for spells that improve or add abilities, while Modifier+Noun is for spells that modify other things, and Noun+Prep+Noun usually has a spell’s form in the first noun slot (Circle, for example, creates a circular effect.) I need to work this out in more detail, however.

The part most people will find interesting is the inclusion of Alchemists and Witches as variant classes. If you use another OD&D-compatible spell list while waiting for the Liber Zero version, you should be able to start playing these now.