Here’s my Venn diagram illustrating the definitions and concepts behind some of the names for TSR-era D&D. Most of you will probably already know this, but it may still be useful for discussion. 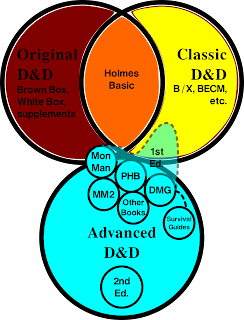 The red circle is Original D&D (OD&D.( This starts with the woodgrain (brown) box that hardly anyone has seen in person and moves into the whitebox era and its supplements (Greyhawk, Blackmoor, Eldritch Wizardry, and Gods, Demigods and Heroes.

The yellow circle is Classic D&D. This is a name that evolved in early online discussions like on the Dragonsfoot forums or the Usenet news groups and it describes the various “Basic” editions that descend from OD&D, distinct from AD&D. Basically, everything that Arneson was awarded a share of as a result of the lawsuit. OD&D material is compatible with Classic, but there are changes and additions to Classic that were not in the original, so it can be considered its own distinct thing.

The orange intersection of those two circles is Holmes Basic. It was created as an introduction to OD&D and is almost completely identical to those rules, but there are a few minor unique points. It also fits the definition of “Classic”, though, so it is sometimes considered OD&D, sometimes considered Classic, sometimes both, and sometimes its own thing.

The blue circle is Advanced D&D (AD&D.) This is the D&D rewrite begun by Gygax to be distinct from OD&D and Classic and thus not something Arneson deserved a share of the profits for. The first edition of the Monster Manual still adheres to some OD&D dice guidelines and so can be used with OD&D without much problem, which explains the overlap. The rest of the first edition books have enough changes to the rules that they are not fully compatible with either OD&D or the Classic line, although they are close enough that you could create conversion guidelines. However, you will encounter people who use “Classic” in a much looser sense of “anything from the early days”, which is what the ghostly dotted pseudopod labeled “1st Ed.” refers to.

The Survival Guides are in their own subset loosely connected to the first edition group. These start adding material that marks a distinct stage in the development of AD&D that some people call “1.5 edition”. Oriental Adventures and Unearthed Arcana could arguably be included here as well, but I didn’t want to make the diagram into an unholy nightmare, so I just suggested that there was some kind of minimal divergence from early first edition AD&D.

“2nd Ed.” is a rewrite of first edition that incorporates the “1.5e” changes and later complicates things further with the “kits” approach. At this point, AD&D and the basic lines have diverged so much it would be hard to justify calling 2e “Classic”, so I moved it to the bottom area of the diagram, to visually suggest its conceptual distance from those versions of D&D.

All of this is TSR-era D&D. WotC-era D&D shares some terminology and a few structures/mechanics that might be recognizable as being descended from OD&D/AD&D, but in the same way that Tunnels & Trolls or Palladium’s games are descended from them. Adaptation is still possible… because adaptation is always possible. But they obviously are not compatible.