Instead of Map Monday, this Monday I’m going to follow up on the Lankhmar review I did last week. There was a reason why I did it. I’ve been having some thoughts about how I should do town and city maps.

You see, the published town and city maps I’ve seen that take the fully-mapped, fully-keyed approach, like Carse or Tulan of the Isles, don’t quite meet the quality I’m looking for in a city map. It’s not that there is anything necessarily bad about them. I keep mentioned Carse because I do like the way the map looks, with its little 3d buildings. And the locations described in those products can be pretty good. But keying all the encounters and locations for an entire town, let alone for a city, just seems like a tedious way to present it. You’d have to study the book thoroughly to find out all the hidden conflicts, secrets, and schemes it contains, and to familiarize yourself with where all the shops and services of various varieties are located, or provide some really, really detailed cross-references, the kind I don’t think I’ve ever seen in a published product.

That’s why I prefer only keying a few important locations at the start and creating a more general map of a city, which I can fill as needed using improv rules, like the rules I’ve already written about here. That’s why Lankhmar, City of Adventure, despite a few flaws that make it kind of unwieldy, still interests me. It’s that promise of “Just-In-Time” mapping that pulls me in. 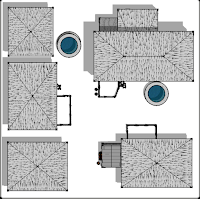 And it’s what’s leading me towards a certain solution. I already have a plan for Last-Minute Cities, a compilation and expansion of my improv town and city rules. But I think urban geomorphs may also be part of the answer. And it’s something I’ve been trying out already. This map is a draft version of one I’ve been working on. When finished, and when I add more urban geomorphs, GMs will be able to drop them into a Lankhmar-like city map with blank spots for geomorphs… or, I’m thinking, replacing city blocks on other maps that were never designed to use geomorphs.

Remember Revelode? It’s a town with a few keyed locations, but mostly just unlabeled buidlings. Suppose you took a block of 3 to 6 building and replaced it with that geomorph? It would be a quick customization. And if there were a map key available for that geomorph, it would be an on-the-spot solution to quickly filling in an urban adventure area. Of course, there are aesthetic differences between that geomorph and the maps in the Instant Village series. But that’s not insurmountable…

Expect to see more on this soon.