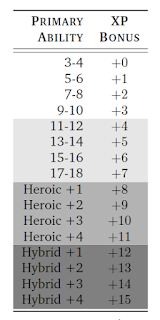 Who wants an experience point table for Liber Zero?

I’ve tinkered with the earned experience before, especially the bonus for primary ability scores. Because who wants to subtract percentages, really? My solution in the past has been to “zero out” the bonuses: instead of -20% for Fighters with a Strength of 6 or less, give Fighters with average Strength a bonus.

That’s the thinking behind this latest version of the XP Bonus Table, which I had to work on … for reasons. This not only assumes that characters with scores of 3 or 4 get no bonus, it also assumes that there is a unified XP advancement table with the magic-using class as the default. All other classes get a bonus. I also included a tweak to the by-the-book bonuses to make the progression smooth.

The table assumes:
The monster XP rules are greatly simplified compared to the by-the-book formula (monster level/character level * base XP.) As a result, sometimes characters will earn a little more XP than in OD&D, but a lot of the times they will earn less.