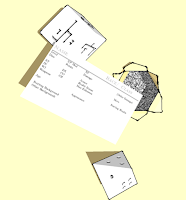 And now, the truth can be revealed: yesterday’s XP Bonus Table was a lead-up to this other thing I’ve been working on, the Liber Zero Character Creation Card, first of a series of LZ reference sheets. It’s a trifold pamphlet, but this time, not a dungeon or village map. Instead, it’s an index card-sized character sheet that you cut out and fill in, with simple directions in the pamphlet.

Experienced players can fill it in without much trouble, since all the terms are either identical to those in OD&D or fairly similar. “XP Mod”, for example, would be either the LZ XP Bonus (a short version of the table is included) or the percentage-based bonus/penalty from the LBBs, or just left blank if you don’t use those adjustments.

Players new to RPGs or to old school class-and-level RPGs specifically might have to consult other reference sheets I plan to make. For example, each class will have its own reference sheet, with class-specific tables for dice and level titles, class abilities, and XP bonuses. A general ability reference sheet will explain the six ability scores and ways to use them in more detail. An equipment reference sheet would include a price list and an equipment card to cut out and fill in to keep track of what’s in your backpack or each bag/sack carried.

This is really a draft version. I may think of better ways to phrase things later, or change things depending on what actually winds up in the other reference sheets.