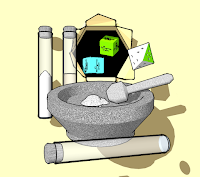 I know I should get the Hybrid Class reference sheet for Liber Zero done, as well as the spell references and a few other things, but I’ve been working on this pamplet instead: the Apothecary variant class. It’s a variant of the Talent class, but instead of a thief, it’s … a chemist! Not an alchemist, mind you, although because this is an extraordinary version of a mundane profession, Apothecaries have the uncanny ability to identify alchemical ingredients, even if they can’t use them themselves. But they can make what are essential “mundane potions”: drugs, poisons, antidotes, the infamous “flaming oil”, and even explosives.

They may seem useless on an adventure, but they are as “combat ready” as a squishy magician or thief. An apothecary with a blowgun and some poison powders could be a handy replacement for a magician with a Sleep spell. A lower level apothecary with not much money can still be useful identifying poisons before anyone “researches” them the hard way, or might have enough cash for some night vision drugs.

You’ll probably need to refer to the Adventurer Skills reference sheet to make sense of the formula research rules, but they are pretty simple: decide how long you want to take, which sets the weekly cost, then the GM rolls a d6 (usually…) On 5+, it takes exactly one base time period (week, month, season.) On 1 to 4, add that many extra time periods. Figure out the total cost based on the number of weeks in that time.