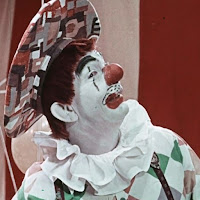 Two more days until Christmas, and here’s another RiffTrax Christmas movie. All of these can be found on the RiffTrax website.

How to explain this? Whizzo the Clown was apparently a clown who hosted cartoons on a TV station somewhere in the Midwest. He was popular enough that they either edited clips from a Christmas episode or filmed new material to make a weird movie for regional distribution. And then Mike, Bill, and Kevin found out about it.

But it’s not just that. They start with a short about Christmas trees made by mimes, maybe. It takes a really bizarre turn. I’m not sure, but I think this short is my favorite live-action Christmas short.

The main feature is just … nutso. As the RiffTrax guys describe it, it’s like watching a middle-aged clown having a mid-life crisis on film. Just a constant stream of gibberish while a bunch of kids try to look entertained.

I hope the little girl with tuberculosis got medical attention afterwards.

“I didn’t think our little holiday short would have quite so much sexual weirdness.”
“The closed captions for this movie just say ‘Lucky you’.”
“There’s a rodent controlling him, like Ratatouille, that’s the only explanation.”
“It’s just not Christmas until Mom gets drunk and tries to surf on the cat!”
“Screaming, laughter… at this point, what’s the difference?”

If you like insane obscure crap like this, also try Christmas with RiffTrax featuring Magic Christmas Tree or (around Thanksgiving time) Fun in Balloon Land.