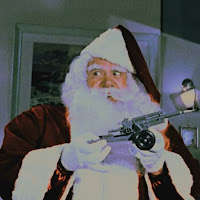 One more day until Christmas, and here’s another RiffTrax Christmas movie. And I think I hear sleigh bells, kids! All of these can be found on the RiffTrax website.

When I was a kid, I saw Santa Claus in a theater, for reals. Some of you may have seen it, too, either under that name or as Santa Claus vs. The Devil. It’s a Mexican movie that an American producer bought the rights to and then dubbed into English. And yes, The Devil, or rather a devil named Scratch, is sent to Earth on Christmas Eve to stir up trouble for Santa.

Mike Nelson, Kevin Murphy, and Trace Beaulieu riffed this back when they were on Mystery Science Theater 3000. Then, as RiffTrax, Mike, Kevin, and Bill Corbett riffed it during a live performance, along with an ACI short, “At Your Fingertips: Sugar and Spice”. Those of you who have seen other shorts in the At Your Fingertips series, riffed or unriffed, know the cheap lunacy you can expect.

The riffing on the main feature, at least at first, is not as good as on the MST3k version, but it’s still pretty funny, plus it’s a much better looking and more complete print. More Merlin! More Keymaker! More dancing!

“Line your garbage with more garbage to make future garbage. It’s the circle of trash!”
“The puppet lovin’ in Act Three makes Team America look like Howdy Doody.”
“Devils in tights breathing nightmares on children. Merry Christmas, everyone!”
“Well, Santa may have to get bizz-zay!”
“Bow down before Blitzen! BOW DOWN!”