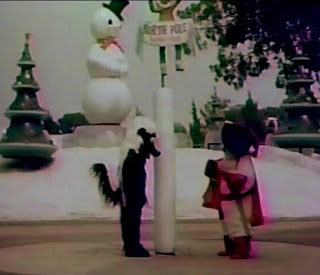 It’s finally Christmas, and here’s my last review of the year for a RiffTrax Christmas movie. Or rather, a bundle of short movies. This, like the previous reviews, can be found on the RiffTrax website.

This is not one of RiffTrax’s newer releases, but it is a fitting follow-up to Santa Claus. After K. Gordon Murray purchased and redubbed Santa Claus, he decided “Why not get more use out of that film?” He took clips of that and combined it with other footage he shot in some holiday theme parks to create short films about a wolf, a skunk, and Puss in Boots, all of whom work for Santa. And there’s also a giant who attacks Santa’s village. And other crazy things that make no sense.

Village of Madness is a bundle of three of those films (not sure if they are the only three, or if there were more…) The first film actually uses very little footage from Santa Claus, but you’ll recognize more in the other two films. But there’s still a lot of new footage, all the better to tell an incoherent story!

“The Christmas Wolf with an Ulcer trope is so overdone!”
“So, to recap: Santa’s toys are manufactured at offices that are overseen by a ferocious wolf, and he delivers them all over the universe using a fifth dimension that Merlin discovered.”
“So, this situation couldn’t be handled with a phone call, hunh? Santa had to sniff the moon flower and come to Earth?”
“The Forced Child Labor Factory Song. One of my favorite Christmas hymns!”
“Trademark K. Gordon: Show, don’t tell. And also don’t show.”

Merry Christmas and Happy Holidays to everyone! I may or may not be posting next week, so I’ll wish everyone Happy New Year as well. Let’s hope for a better 2021!