Most, if not all, of what I have left to do in the clone project is pretty complicated, so I thought I'd take a break and answer James Maliszewski's question from Friday: "When you think about Dungeons & Dragons, the cover of what product comes first to mind?" 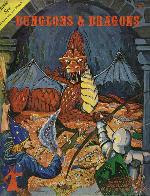 Strangely enough, it's not the cover of the first D&D book/box I ever owned, the Holmes Basic boxed set. As I've mentioned before, I started playing D&D with a friend who had been taught the game by a teacher as part of a math class. My friend had mimeographed tables/reference sheets which he used to run the game, so I never saw an actual D&D product until I bought Holmes Basic. 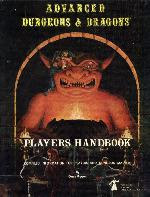 s cover is pretty D&D, and iconic enough, in its way. But it's not what I first think of, because my next D&D purchase, the 1e PHB, is far more iconic for me. It shows adventurers in the process of adventuring, as opposed to the dragon cover, which shows a potential for adventure, but doesn't seem as in-the-moment, despite the fact that we see the MU waving a wand and the fighter aiming an arrow. Perhaps it's the air of mystery: we know what is going to happen in the Holmes cover (a fight with a dragon,) but what's going to happen to the thieves robbing that dark temple? Will the idol come to life? Is there a trap? Or will something else happen, or nothing at all? We don't know.

For this reason, I also like the internal illustrations of the dwarves and halflings looking at the Magic Mouth, mentioned on the RPG Diehard blog. When you first get introduced to D&D and look through that book, not knowing what a Magic Mouth is, you have no idea what that illustration means, other than "adventurers find something weird". But you want to know. And even when you do find out about that spell, there's still a mystery about what's going to happen to those guys, what the mouth is saying, whether it's important, or a trick. 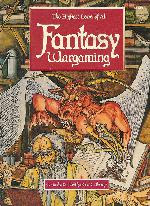 nother cover that sums up D&D for me is not actually a D&D cover. It's the cover of Fantasy Wargaming, by Bruce Galloway et al. The scholarly sorcerer isn't adventuring, but could be... imagine the party entering a wizard's workshop and rifling through the magical paraphernalia pictured on that cover... and someone makes the mistake of reading the wrong inscription, summoning Baphomet from an open spellbook.