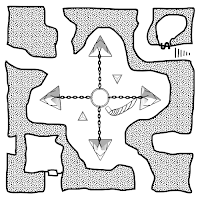 There's been a lot of good geomorph creativity on the blogosphere, especially lately. Dyson Logos, Risus Monkey, Stonewerks, David Millar and JDJarvis. And all these are designed to work together, which is why David Millar was able to create a mapper app that uses the square geomorph sets. Man, I wish I were making some geomorphs...

... But I couldn't really see a niche that needed filling, until I thought of feature-specific geomorphs. You get a few kinds of features in the existing sets out there: pools, pits, chasms. But what about more specific, but still open to interpretation, so that you could add one or two "special" geomorphs to 5-8 from the other sets for an entire level?

I figured I'd kick off with something simple: a geomorph with a ring of horned pillars, based off that idea from the Torch, Pole, and Rope blog that I turned into some images (like this) not too long ago. I'm betting Michael Curtis's plan has something to do with the central ring being a gate, but there's no need to assume that circular object is a ring when you're looking at this overhead view: it might be a disk, might be a cylinder, might even be a concave basin, for flaming oil, or a glass sphere. It might be raised above the ground, or it might be a pit, with the chains attached to spikes around the rim. The small triangles are either brazier tripods or pylons/obelisks... or something else. Plenty of room for interpretation in this version.

This is going to be part of the "S" series, for Stonework and Statue Features. I'm not going to make these as often as the other guys: probably no more than one per week.