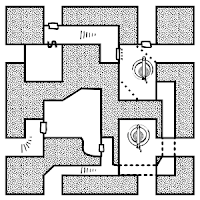 As promised in yesterday's geomorph, here's a version with two "well rooms" identical to S3, but with the fake well being the upper rather than lower well. The tunnels and rooms on the lower level are completely different. Thus, players can't always be sure which room contains the secret entrance based on the position of the well in comparison to room entrances. I also used a curved staircase near the lower left entrance to the geomorph, which is the first time I've used one of those in Inkscape.

Edit: Had to fix this one, too. It was missing the white border around the geomorph.