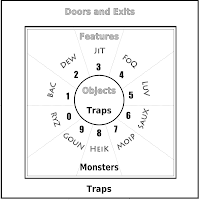 Why I've changed things: The font changes and label re-alignments were just to adjust readability, while the numbers were added to make it easier to use the radial "pie piece" regions as a replacement for the Random Random Table. Those, of course, are mere cosmetic changes and don't affect the way the table is used.

The name changes and label-swapping are bigger. One problem with old dice map was the duplicate "Features" label; the "Features" in the center were meant to be objects in the room that you could interact with (fountains, treasure chests,) but the "Features" in the middle region were meant to be decorations or scenery. I've changed the names to make this distinction clearer. I also swapped "Monsters" and "Features" to match this modified dice-rolling technique:
The result of the d6 in a given area indicates:
The words in bold begin with the appropriate letters linked to that numeric result on the Random Random Table; I try to use this trick as much as possible, even with rolls that aren't d10-based, to make tables potentially memorizable. The 1 and 6 results for Features are based instead on approximate height from the floor, related to the d6 hit location chart (another of my favorite mnemonic schemes.)

Where a d6 lands in the Features region indicates the starting letter of a descriptive modifier, such as a color, a shape, a material, or a symbol used for decoration. To a lesser extent, this applies to Object results as well, but if the d6 lands almost dead-center, you'll have to assume that the object is fairly generic for its type.

If the stocking roll indicates a monster, roll at least 1 die, plus one die in certain areas (close to entrance, close to boss, close to known treasure vault,) plus an extra die for every 4 full levels of dungeon depth. This more or less acts like the graphs Zak S. suggested for his "collapsible encounter method", although this combines "trap" and "monster" in a single roll. I'm thinking this should be a d10 or d20, either referencing a prepared list (as in Zak's method) or with the last digit of the roll indicating the first letter of the monster or trap type, and the location where the die lands indicating the first letter of a descriptive modifier.

I will have to do an example or two as a separate post, as well as expand the idea to full dungeon creation.