As I mentioned in my last Map Monday post, I'll be giving geomorphs a rest for a while. I'd like to work more with other kinds of maps instead. But before I get too far into that, I want to try out some new techniques in Inkscape to see what I can do visually. 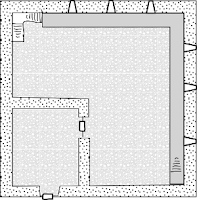 This map of a simple fortress is a test of some of those techniques, which explains why it's so simple. It's a 100' x 100' square fortress with thick walls of sandstone or adobe; there's only two rooms, but a GM could add wooden internal walls to break it up more. Only the ground floor is shown, but there's a wooden walkway running around two walls of the fortress, with arrow slits accessible from that level. The map shows stairs going up to another level, which may be the rooftop or one or more additional floors, if you want more of a tower than a squat blocky fort.

The main point of this particular map was to test pattern fills. I'm very dissatisfied with the built-in Inkscape patterns, but I discovered while I was making the tar pool geomorphs that I could create temporary fill patterns. So, in my new map template, I've created replacement patterns for several kinds of material; I used the light random dot pattern to indicate the sandstone walls in this map. I also used a stone floor pattern, but forgot to create a wood planks pattern before I started the map, so the wooden walkway just uses a simple gray fill.