So, the OSR Discord’s been playing around with a neural network webtoy that you feed a prompt like “Available player character classes are fighter, magic-user, cleric,” and the network completes it with “… ursine or wizard.” and a bunch of other material yoinked from various RPG sites.

So of course I fed it some lines about the history of the Nine and Thirty Kingdoms setting to see what came up. 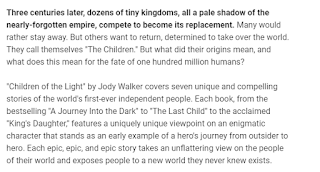 The odd book review at the end might be interesting at some point, but the first part got me thinking about secret kingdoms that call themselves “The Children of Vaeturia”. They were real physical kingdoms, founded shortly after the end of the Wyrm Times, but something happened and all their towns, cities, fortresses, and armies were shifted into an ethereal state. So, they can see and hear the real world, but in general can’t interact with it.

Individual citizens of “The Children” have found ways to re-materialize, but the bulk of the kingdom inhabitants are trapped in a shadowy existence. Those with the ability to re-materialize work as agents for these shadow kingdoms, destabilizing “real” kingdoms and searching for powerful magic that can re-materialize their kingdoms completely, re-establishing themselves as real, geographical kingdoms.

In some cases, younger kingdoms may have built new settlements on land ethereally occupied by “The Children”. They will just have to go. Inexplicable acts of arson. Ghosts driving people out of the territory.

Labels: 9and30, todo
Email ThisBlogThis!Share to TwitterShare to FacebookShare to Pinterest