I’m looking at the Last-Minute d6 Dungeons series (links below) and wanting to simplify it some more… but also, wanting to make it more readable.

Here’s what I mean: I plan on creating customizable dungeon maps that use these techniques. It would help people a lot if I could put an instruction right on the map, so that the GM using it wouldn’t need to turn back to an instructions page. Instead, the introduction would give a couple simple icons and how to interpret them.

Example A: Side Passages 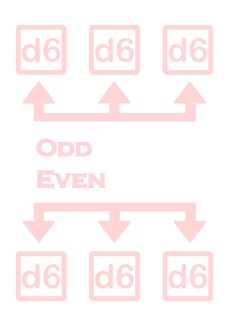 If the second or third exits exist, it will be on the same side as the first exit if the d6 that represents it is odd, or the opposite side if the d6 is even.

(There would, of course, be another glyph for tunnels that run vertical on the map instead of horizontal, but I didn’t make one yet. It would look like the above glyph, but rotated 90 degrees.) 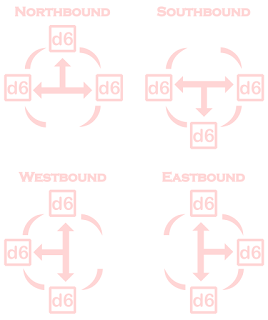 Same 3d6 roll as for Side Passages, but the position of each d6 is the order of branches or exits clockwise around the compass. (This is what the curved “triangle” represents.)

In either Example A or Example B, the number of matches tells which table to use to look up the d6 result (loose, doubles, or triples,) as per the Drop Dice Exits post.