You may remember the world-building handouts posts (Part I, Part II, Part III) that I did a while back to illustrate some things I was saying about keeping campaign background information to a minimum, so that players don't have to memorize massive amounts of information just to play. I promised to do a sample handout showing which bits of world-building background would be available to players.

It's done, and you can down load it here: 9and30handout1.pdf.

It's two pages, but only one page is written information. The first page is a local map, just a quick reference for what is nearby and the names of a select few distant places. There's actually another tiny map showing the entire Great Fettered Sea on the actual handout page. It took a little bit of time to do the main map, but not as long as I was expecting. The hard part, really, was including it in the PDF with the proper resolution and placement. 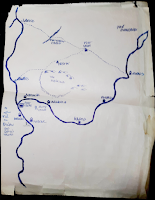 For reference, here is a phone pic of the original map I used about ... five years ago, I think? It's pretty crude and beat up. And really, that was the only handout I used at the time. I did give a quick run-down at the time of a couple bits of information that are in the new handout, but I really didn't take that long to explain the setting. It's a pretty simple setting.

Labels: 9and30, maps
Email ThisBlogThis!Share to TwitterShare to FacebookShare to Pinterest