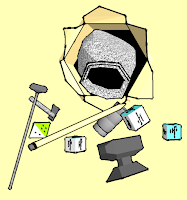 Time for another Liber Zero reference sheet in pamphlet format: Liber Zero Price Lists for Adventure Gear, which I like to refer to as the LZ Adventure Gear Card. Like the LZ Character Card, the pamphlet includes an index card-sized form that you cut out
and fill in, following the simple directions in the pamphlet. But this is a gear card, representing one large sack and its contents. Carrying multiple sacks means having a stack of multiple index cards.

What this means is that players can hand over one or more index cards when they drop sacks to lighten their load and move faster. If they have time or have figured it out in advance, they get to pick which cards to hand over. The GM sets the cards aside and decides whether the sacks stay in that spot or are picked up. Either way, players can find the sacks again later.

If a thief steals gear, the GM can ask the player to shuffle their gear cards and fan them out upside down, then draw cards blindly until the thief gets caught or has had enough. Thief players can use the same procedure to steal from an NPC or another player character. This can also be used for random overloaded sacks breaking.

If a thief is stealing one or more items from a sack, the gear card has numbers from 1 to 6, for six different items. Pick a card at random, then roll a d6 for which item to take from that card.

This all combines with a simple encumbrance system based on sacks. PCs can carry up to 10 sacks worth of gear. So, 10 index cards, less if wearing armor. Each numbered line on the card represents one sixth of a sack’s capacity (one bag, instead of one sack.) As long as a character carries fewer than five sacks worth of gear, movement is unencumbered. Five or more sacks halves move, and 10 sacks halves it again.

In addition to all this, there are two systems for figuring out the cost of items: a simple one on the left inside panel and one based on materials and features of items on the middle and right panels. It’s all very compact.