First, I made some corrections to yesterday’s General Abilities pamphlet and uploaded the new version. Not a big deal, just a problem with some wording. 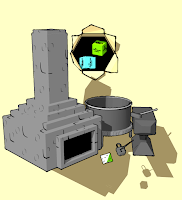 Second… a surprise extra Liber Zero pamphlet this week! It’s the Adventurer Skills Player Reference Sheet. It starts out with a short and simple method of handling players who want their characters to have training in another skill or weapon, either during character creation or added later. This is a tiny add-on to OD&D and doesn’t change gameplay significantly. The only game effect is that trained characters can do things a little faster. There’s also a training time and cost table that looks new, but is really just a repurposing of existing rules. More on that in a bit.

The pamphlet has an additional optional system for handling characters with a little more detail in their background. This is a rewrite of the background system I’ve proposed before, and it is now better integrated with the traditional ability scores. Rolls are kept to a minimum. Again, the focus is on how long tasks take, or the ability to skip rolls you might have to make otherwise.

Design Notes You Can Skip

Back to the training table. The table is, believe it or not, based on the magical research rules. Previously, I’ve proposed using the cost to research a 1st level spell as a basis for training costs. Just divide the cost by 10. Researching a 1st level spell with a 100% success rate costs 10,000 gp and takes 1 week. So, the cost to pick up a new skill is 1,000 gp (called “coins” in the pamphlet, to make it compatible with the silver standard houserule.)

But I wanted to make things simpler than that. I assumed instead: When you have paid the maximum amount, regardless of whether you pay it all at once or broken up in installments, you succeed… Unless you interrupt your training, of course. Doing things quicker should cost more, but shouldn’t always work. So, how to figure out the odds?

I decided to go with the simple 5+ on 1d6 situation roll again. On a 5+, you succeed in the shortest amount of time. Otherwises, multiple the die roll by the base time to get the additional amount of time you spend. If you try to learn it all in a week and blow your roll, the worst that can happen is that it will take five weeks. Similarly, if you try to finish it all in a month, the worst case is it takes five months, and so on.

So: I set the maximum time in each case to full cost (1,000 coins) and then divide the time by the number of weeks to get the per-week cost.
If a PC pays the full amount up front, they can either just call it “1 week” or, to see if they get some free time, roll for it the same as for the other training times. This means training takes 1 to 5 days.