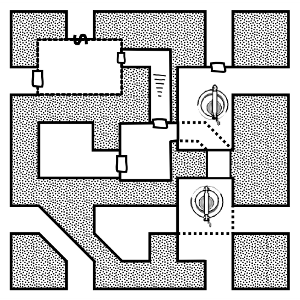 This geomorph uses two wells, but with a crank/wench to raise and lower a bucket into the well. However, one of the wells leads down to a square chamber, which connects to a group of rooms on a slightly lower sub-level. As you can probably guess from the title, there's going to be a Geomorph S4: False Well II, which will have two wells in two rooms identical to the well rooms on this geomorpg, but with the false well in the upper room instead of the lower, and a completely different room layout for the left side of the map.

It's up to you to decide if the false well has a ladder, a rope, or no means of descent other than jumping.

I found out I was having some problems with the image dimensions in Inkscape, so I had to wrestle this in the GIMP for a while to get it to match the dimensions Dyson Logos uses. I've adjusted S1 and S2 as well, so I'll be posting those updates later.