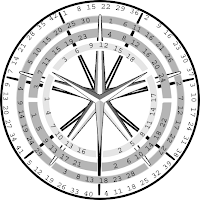 I may not be planning on playing the Dungeon Crawl Classics RPG from Goodman Games, but that doesn't mean I can't help other people out... The biggest topic of debate about the game is the requirement of Zocchi dice. Those special dice are a bit expensive, and that's a large collection to cart around. So how about a dice map to eliminate everything except the d6 and d20?

Introducing the Perverse Polymorpher. Print it out and use it like the other dice maps -- except this one only generates numbers. You'll note that there's four rings of numbers: a light-shaded inner ring divided into three sections, two darker-shaded rings divided into four and five sections, and an outer ring divided into seven sections. Each ring is used for generating several different dice types; when rolling for, say, a d5, use the five sections of the outer dark grey ring and the points of the central pentagram to divide the entire circle into five "pie pieces"; similarly, when rolling for a d7, ignore the other rings and concentrate only on the outermost ring and the seven-pointed star to define seven "pie pieces". The inner dark grey ring divides the circle into four quarters, and the innermost ring divides it into thirds.

This leaves d16. For these, drop a penny and a nickel on the map simultaneously. The penny is your d3, d4, d5, or d7 index, which tells you which number to read from the ring section indicated by the nickel. For a d16, read the penny as a d4, then read the nickel using the penny's index and the first four numbers of a d4 ring section. If you need a d20 with this method, you can use the penny as a d5 index instead. You can use the same method to generate d25, d28, or d35 as well, assuming you really need those.

Edit: I forgot to add that with three coins (penny, nickel, dime) you can do away with dice entirely. But more likely, if you have the standard polydice set, you can use the d4 instead of a d6 to generate all the results you would otherwise use the penny/nickel technique to get. You can do all dice (except d%) with just one regular polyhedron and the Perverse Polymorpher.

Edit 2: Just a note for people being directed here from the Goodman Games forums that the most recent version of the Perverse Polymorpher is attached to this post.

Edit 3: Another version, this time arranged like the drop dice charts in Vornheim.

Labels: dicemap
Email ThisBlogThis!Share to TwitterShare to FacebookShare to Pinterest