I want to get Map Mondays back on track with a series of "megadungeon modules". The plan is to develop the technique I mused about in Megadungeon Format Tricks and its sequel. In summary: each megadungeon module is a single room or set of rooms focused on a single concept (puzzle room, throne room, crypt of a knight, arcane prison of a demon, elaborate trap, guard room, gateway...) This is what I sometimes have called a "hub". The module is in a one-page dungeon format with a 10x10 or less map, structured like a geomorph, with exits (if any) in one or more of the standard geomorph exit locations; it also includes a full write-up of the room or rooms and a list of one to four supporting room types, monsters and treasures. To use the module, you position it on your level map and padded the borders with ordinary rooms, which you draw by hand or fill in using geomorphs or random mapping techniques. Designate the surrounding rooms as being of one of the types defined in the module and randomly stock them as described for each type; thus, it does not matter where "storeroom with 1d6 rats and 2d12 silver coins in a sack" is located, how it's shaped, or what it connects to. 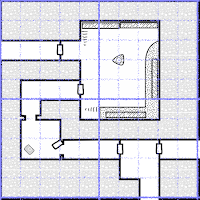 I would like to try out each module concept before I write it up as a module, so to start off, here's a module based on a couple rooms the players in my group explored last month. It's not exactly the same; I've changed the shapes and connections, added some things, removed some others. The basic concept is a library for magical research, abandoned by the library's owner; in our game, the wizard is said to have fled the area about a century ago. I've changed the "abandoned familiar" from the one I actually used, since the little bat-winged critter in our game is still hanging around because of a Charm Person spell. Can't give the party any clues as to what that little guy is!

My test download of this MegaModule fits all on one page, but it was difficult to get Google Docs to do that, so I fully expect people will report problems with the document. Google Docs doesn't like the one-page template; I had to fight the format to get everything to fit. One weird problem was that the map image would disappear if I changed one of the headings to a different size. I hope the changes in this version stick, so that I can just create a copy and edit it to create future MegaModules.