I wrote a big long post that covered only half of Step Two of the Last-Minute Hexcrawl process, but realized it's probably better if I explain the dice techniques separately, so that I can shorten the next post and keep everything related to Step Two in one post. I have two tricks that have evolved from previous tricks: one generated blobs, the other generates lines.

By "blobs", I mean a two-dimensional area. You need at least one d10 and multiple d6s. Roll these all at once in a large, clear space. The area we rolled the dice in represents an abstract map, which we read exactly as we would read a map laid out flat on the table in front of us: west and east are on the left and right, respectively, and the side closest to us is south. 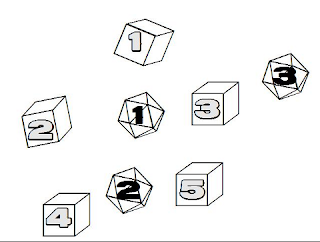 The pic to the left shows 3d10 (actually, they're d20s, but let's pretend) and 5d6. Each d10 is the "center" of a blob, or possibly just its main point. We look at how the d6s cluster around it to get the rough shape and extent of the blob. Each d6 represents one "arm" extending in the indicated direction, while the result of the d6 represents the number of hexes it extends. For example, the d6 marked "5" to the left of the d10 marked "2" indicates that the #2 blob extends 5 hexes east, while the d6 marked "4" extends 4 hexes southwest.

If two d10s are next to each other with no intervening d6s, such as 1 and 2 in the example pic, the blobs overlap. All five six-sided dice describe Blob 1, while the 3, 4 and 5 describe Blob 2; the 3 and optionally the 5 describe Blob 3, which is adjacent to Blobs 1 and 2, but doesn't overlap. 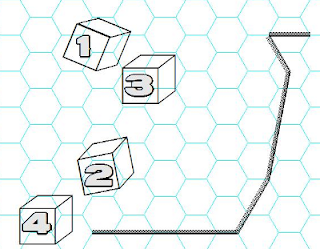 A related trick is used to create curvy or jagged lines. Two points, like a mountain range and the sea, define a straight line running in one of the eight basic compass directions (north to south, northeast to southwest, etc.) By rolling 4d6, we can define how the line twists and turns on its way between the points, with each die result being the number of hexes from one point to the next.

The pic to the left illustrates turning a straight west-to-east line into a zig-zag. If the west and east ends aren't just directions, but sharply defined (as when drawing a road between cities,) the position of the endpoints would need to be altered.

The exact dice rolled, of course, depends on your needs, and what other dice you might be rolling simultaneously. Three dice will be fine in many cases, four is probably the most you will need. I used 4d6 in the example, but most of the specific procedures I will cover in the next post in the series will use d4 or d8, since d10 and d6 will usually be spoken for.

Sometimes, you don't need to know the two-dimensional location of each point on a line, but just need to know the numbers rolled in a particular order. For example, if you set up a climate or elevation gradient as described in the Central Casting post, you can use 4d4 to turn a straight slope into a climate or elevation profile for the entire map. Each 4 rolled means the elevation or temperature rises higher than expected, while each 1 rolled means it drops lower than expected; a 2 or 3 means the default slope is used.