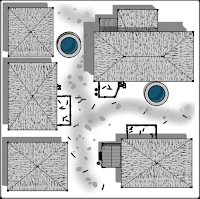 This week’s Map Monday is an urban geomorph, a town or city block usable in any map. Behold! Last-Minute GM Urban Geomorphs: Common Quarter Block 1. I’ve been working on this since before I posted the review and discussion of Lankhmar, City of Adventure.

My thought process was this: when I was doing the Instant Village series of pamphlets, I tried to do a town (Revelode) and mentioned then that I noticed a problem: the pamphlet format is just too tight a space for a town map, let alone a city map. If I insisted on doing towns and cities in the pamphlet format, I’d have to split the map across several pamphlets.

Which is when I though of Lankhmar and its geomorphs. One of the problems I had with Lankhmar was that I thought there weren’t enough geomorphs. There’s only twelve. That lead to the idea: “Why not do more geomorphs for Lankhmar or a similar city?” And that in turn lead to: “Why not do each geomorph as a pamphlet, so that a GM could randomly pull a pamphlet out and use that for unique locations in a city?”

The pamphlet uses several random rolls to make the geomorph reusable. There’s a random jobs table specific to this city block (everyone’s a simple laborer.) The head of the household’s name is random, as are the number of additional people living in a household. In addition to the built-in randomness, the GM can always ignore the map key and use the map for another city block with no special encounters or custom encounters they write themselves.

There will be more urban geomorphs. I will also continue the Instant Village series, focusing on villages and hamlets there instead of towns.