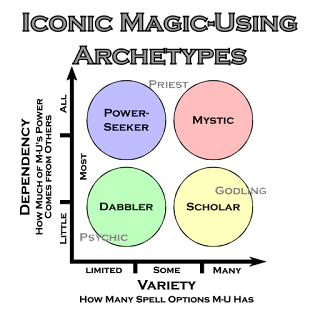 These are magical archetypes rather than classes. They are loosely defined, compared to classes, with boundaries not even as rigid as I've shown here. They are the four basic approaches to magic:

Dabblers, brought up by JB, are those who aren't dedicated to improving their magic. It's just something they occasionally use. They might not even be magic-users by class, but may just pick up a spell or two somewhere, or have an innate power either inherited or acquired by accident.

Scholars are those who acquire spells through study and practice. They form the bulk of what most people think of as D&D magic-users: professional thaumaturges with an arcane library.

Mystic is a perhaps inaccurate label for those dedicate to exploring all that is possible with magic. They may be researchers, experimenters, or mad wizards, locked away in some tower somewhere, amassing huge magical libraries and binding hordes of demons, elementals, and other spirits to their will.

Power-Seekers was the most neutral-sounding label I could think of for those who seek power rather than knowledge. They don't care how it works or what they have to do the get it. They might study, if that's what they have to do, but if they find a shortcut, they will take it.