I’m still occasionally working – well, half-working – on ways of making the magician (magic-using class) easy to modify on the fly. The way I imagine it working is that you offer players only three classes (talent, hero, magician) and when a player says “can’t I be a [more specific class concept]?” You reply “Sure! Just take one of those classes and we’ll make these changes.”

For magic-using classes, you can make superficial changes to how spells are recovered, how they are cast, and how they are dispelled and that will cover a lot of variations. But before I even go there, I think I need to start with defining iconic magical types. Not “iconic in the history of D&D”, but “iconic in literature and folklore”. I really don’t like some of the standard D&D class definitions, which seem to focus on mechanics, and I prefer to lead players away from thinking about mechanics.

My current iconic class concepts start with this simple progression from “arcanely academic” to “selfishly practical”:

It’s important to note that the WotC warlock class would sometimes fall within the bounds of “warlock” as I define it, but my definition is broader. A warlock, in my mind, is the kind of magic-user seen in some fantasy lit who steals magical power from those who have acquired it through birth, blessing, or training. So, more like warlocks in “Charmed”, or what the MCU-version of Baron Mordo seems to be heading towards. Getting powers from pacts could be thought of as a variation on this.

Scholarly Magicians are Low Dependency, High Flexibility. Power-Hungry Warlocks are High Dependency, Low Flexibility. Witches are dead center, with a limited set of natural powers supplemented by magical training. You can see this easier on this diagram. 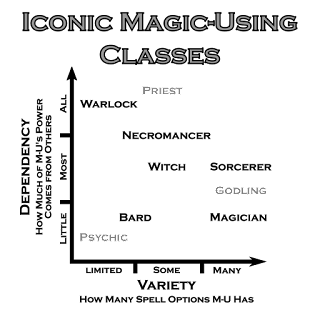 Explanation of other iconic classes on the chart:

Gray entries are not traditionally considered magic-users in D&D, but essentially that’s what they are.

Any iconic character concepts that I missed?