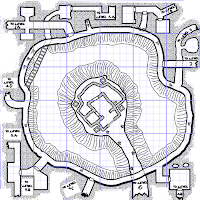 Some of you may be wondering why I was fiddling with stairs. I had this map idea for a while, partially based on a dream, partially based on some blog posts a week or two ago. What if you gave the PCs easy, central access to multiple levels of the dungeon, all at once? I started toying with the idea of a central chasm with ledges running around the edge on multiple levels, with stairs connecting the levels ... but not necessarily in order.

This is the map I started on about a week ago. It's finished now, but I was toying with the idea of a fancier 3d map that would show the levels clearer. I probably won't turn this particular map into a 3d Sketchup version; instead, I'll do another map based on the same idea, for use in a possible game I may be starting soon. So, I'm releasing this version of MegaChasm to you.

MegaChasm by John Laviolette is licensed under a Creative Commons Attribution-NonCommercial 3.0 Unported License.

Stock the main level, create your versions of the linked levels named on the map, and add levels to the central tower. And tell me about it!

Edit: Forgot to mention I'm including this post as part of this month's Blog Carnival on the topic of RPG Cartography.